The Peak District covers a large area including Derbyshire and Staffordshire. It is a beautiful area within easy reach of major cities and contains stunning scenery and numerous villages with traditional pubs offering excellent locally produced food and drink.

The Peak District National Park was the first National Park created in Britain. We are situated near the north of this area called the ‘Dark Peak’ with its characteristic rugged moorland and gritstone outcrops offering hill walking for a range of abilities and fantastic rock climbing.

The highest of these peaks is Kinder Scout, 3 miles from the farm it has a huge peat plateau at its summit which drains into Kinder Downfall. When the wind is in the right direction a spectacular "upfall" is created! 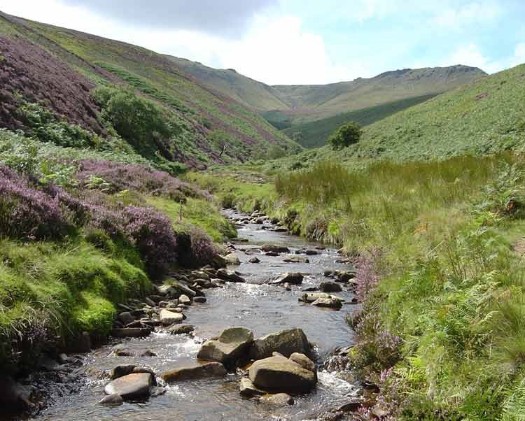 Only 10 minutes drive from Shaw Farm, Lyme Park Country House and Gardens was the setting for the film Pride and Prejudice. You can tour the house and gardens or the extensive country park which has a large herd of Red Deer.

Further south the ‘White Peak’ is famous for its attractive rolling limestone hills and dales. There are many disused railway lines and trails where bikes can be hired, you can stroll along babbling streams rich with wildlife. Visitor attractions worth seeing include the impressive stately home Chatsworth House.

Towns in the Peak District

The popular village of Castleton set in a dramatic Limestone valley is half an hours drive from Shaw Farm via the spectacular Winnats Pass. Over the millennia running water has eroded the limestone and created vast networks of caverns providing some of the finest caving and potholing in the country for the more adventurous.

Castleton boasts a number of Caverns & Caves you can visit including ones where Blue John and other minerals were mined. Overlooking Castleton, the ruins of Peveril Castle, an imposing Norman Fortress offers great views over the valley.

The scenic spa town of Buxton is only a 30 minute drive away and has many popular attractions including the Buxton Opera House which hosts many famous acts year round. The Pavilion Gardens have a nice cafe and hold a monthly farmers market plus other regular events.

Bakewell, another popular town and home of the Bakewell pudding, is 45 minutes drive.